How did the Kinsey reports of the 1950’s legitimize predatory sex behaviours? 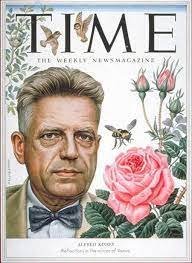 Kinsey’s revolutionary views of human sexual behaviour changed all of this. His works and views influenced all aspects of US society from congress to school curriculums. The biggest problem with Kinsey’s research on human sexual behaviour is that he allowed and encouraged babies and children to be used as research participants. Kinsey allowed, encouraged and defended paedophilia in order to obtain what he considered to be important data and since his views were so revolutionary, few people spoke out against his unethical and harmful research practices.

At the time, Kinsey reported that he was gaining data from multiple paedophiles although it was later revealed that he had access to only one prolific child sex offender. Kinsey would ask this predator to time how long it took him to make a child orgasm. Table 34 of the Kinsey report detailed how many multiple orgasms babies and children aged from 2 months to 14 years could have within a certain period of time after being orally and manually stimulated by an adult. The notorious table 34 detailed how an 11-month-old baby was stimulated to 11 orgasms within a single hour.

Of course, relying upon the interpretations of a child sex offender is going to cause research and data problems however Kinsey deliberately looked past this. For example, the child sex offender that was providing Kinsey with his data described a baby or child’s orgasm as “extreme tension with violent convulsions, often involving the sudden heaving and jerking of the whole body…groaning, sobbing or more violent cries, sometimes with an abundance of tears especially amongst younger children”. It is clear to us in the present-day moment that the predator is misinterpreting the baby/ child’s significant stress and distress as their ‘orgasm’.

Kinsey himself argued that paedophilia did not necessarily harm children and was in fact “good for them”. Kinsey concluded “The adult contacts are a source of pleasure to some children and may sometimes arouse the child erotically and bring it to orgasm. It is difficult to understand why a child, except for its cultural conditioning, should be disturbed at having its genitalia touched”. Again, since Kinsey’s views and works were regarded so significantly by those of influence (congress, schools, other researchers), it is easy to see how the masses were deceived into ‘normalising’ child sex abuse and exploitation.

That’s not to say that Kinsey is directly responsible for paedophilia but his works and views certainly did not deflect attention away from the abhorrent practice. His data and his views regarding infant and adolescent sexuality was deemed acceptable as they were viewed within the context of ‘human sexuality’ which expands across the lifespan. The Kinsey report also reported that 37% of adult males and 13% of adult females had at least some homosexual experience to orgasm. Kinsey’s research and data in this particular area normalised and legitimized ‘homosexuality’. Kinsey also developed the ‘Kinsey scale’ which measured the degree of homosexuality or heterosexuality.

Similarly, Kinsey was responsible for bringing marital sex (and sex in general) out of the darkness of bedrooms and into full public view. Sex and sexuality in the 1950’s were taboo subjects which one did not openly discuss. Kinsey changed all of this and his works and views encouraged openness and discussion even amongst the highest echelons of society. Kinsey normalised and legitimized discussions about marital sex, extramarital sex, child sexual exploitation, sadomasochism and homosexuality all in one fell swoop. Kinsey was admired and revered amongst the masses. This is how revolutionary his works and views were.

It can be hard to understand just how influential Kinsey was. People who had predilections for children were suddenly provided with a justification. Finally, someone with clout and influence understood their ‘desires’. In some ways, Kinsey disrupted empathy. What I mean is, when a baby or child started to try and escape, heave around, violently cry, etc, rather than this invoking an empathetic response (I am hurting this baby/child), Kinsey provided them with a rational justification “Oh this is just what an orgasm in a baby/child looks like”. To provide modern context to Kinsey’s views, look at the impact that the ’50 shades of grey’ books and movies had on legitimizing and normalising BDSM.

What is the purpose of psychology?
Psychiatry vs the antipsychiatry movement.
Neurodiversity and neurodevelopmental disorders.