Do serial killers collect trophies from their victims so that they can intentionally trigger their own ptsd-like flashbacks? 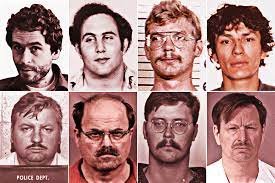 This is a radical suggestion and to better understand this proposal it is important to understand both the mind and emotions of serial killers and the nature of ptsd flashbacks and intrusive memories. Flashbacks and intrusive memories are the result of an environmental, auditory, tactile, olfactory, visual or vocal trigger which transports a person, cognitively, to the time and place of the traumatising event. In a very real sense the individual, at the time of a flashback or trigger, is re-living the traumatic event as it originally occurred. The sights, sounds, smells, thoughts and emotions are all experienced just as they occurred the first time.

Think of a flashback or a trigger as being a mix between a virtual reality headset and being automatically and involuntarily transported directly into your worst dream or nightmare. The dreamer experiences their dream not as a dream but as reality and they can experience a range of sensations, thoughts and emotions. For virtual reality headsets, the aim is to project to the viewer a scene, such as a rollercoaster for example, which appears to the viewer to be real and authentic. The viewer, although they are personally experiencing a different reality, still exist in the same reality as those around them.

The difference is however, with a PTSD flashback, the flashback is projected onto, and integrated into, current reality not a dreamscape or a virtual landscape. What I mean by this is, if an individual is experiencing a flashback, which was perhaps triggered by hearing a car backfiring for example (which is a credible trigger for war veterans) then the individual perceives their surroundings not as it truly is in reality (i.e., a neighbourhood street, inside a shopping mall) but as it was at the time of the traumatic event (i.e., in the jungle or the desert fighting enemy soldiers). The traumatic memory and experiences superimpose themselves onto reality. The noise of the backfiring car becomes the noise of a gun firing. The husband or wife standing in front of the PTSD individual in reality becomes the enemy combatant standing in front of them in a flashback.

Masturbation and orgasmic conditioning may serve to positively reinforce the flashbacks and intrusive memories for a while but this too will eventually desensitise the serial killer from the memories. This could explain why serial killers have an overwhelming urge to kill more people and collect more trophies. This is also where the suggestions of object permanence may come in. The intense memories may help the serial killer to remain ‘connected’ to their victim. When their memories of the victims’ final moments weaken, so too does their sense of object permanence. To continue feeling connected to others, they must continue to kill.

The suggestion that serial killers intentionally induce their own ptsd-like flashbacks is exactly that… a suggestion. To the best of my knowledge, there is no research evidence backing up this assertion. It is possible that serial killers collect trophies in an effort to trigger intense memories of the murder akin to the way flashbacks and intrusive memories trigger intense responses in ‘normal’ people. The serial killers consistent and persistent use of trophies to trigger flashbacks and intrusive memories also makes a lot of sense. After all, this is the basis of exposure therapy which is highly effective in the treatment of ptsd and associated conditions. Exposure therapy suggests that the more the client becomes accustomed to their trauma, through exposure rather than escape and avoidance, the less intensely they will experience their traumas.

Why isn’t healthy narcissism discussed more on social media?
A look at how to choose the right mental health professional.
What is the relationship between assertiveness and emotional intelligence?