Why do people tell lies? 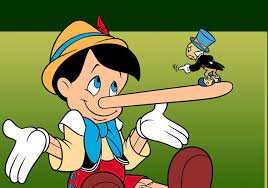 Why do we lie even when society tells us that we shouldn’t? As children, we are raised to always tell the truth lest our nose should grow like Pinocchio’s. When we enter our pre-teen years though, we find out that our parents lied to us about several things like the existence of Santa Clause, the Tooth Fairy or the Easter Bunny for example. These shocking childhood revelations taught us that sometimes lying is acceptable if it makes other people happy. As children we also discovered that most people cannot always tell the difference between truths and lies and so sometimes telling lies is more advantageous than telling truths.

We tend to carry these childhood lessons into adulthood. I can absolutely guarantee that no adult is immune to lying whether it’s telling lies to themselves or lying to others for whatever reason. Lying in and of itself is not necessarily a bad thing however when lying becomes a person’s default setting, and they cannot help but tell lies even when the thing that they are lying about is inconsequential, their lying becomes pathological. Pathological lying underlies many personality disorders and other mental health conditions. Like I said though, we are all prone to lying at some point so let us have a look at some common reasons why people lie.

Most people can relate to this. Maybe you were caught doing something that you shouldn’t have been doing and rather than admitting your wrong doing, you may tell a lie instead. The intention behind the lie may be to minimize your involvement. Let’s use an example of gossiping. You were caught out gossiping about a close friend and when that close friend confronts you, you may feel forced to lie out of embarrassment and say something along the line of “It’s not like that. I was just using you as an example. I didn’t mean what I said”. Lying can sometimes seem like gaslighting as you are trying to distort both your reality and the other person reality.

This one is closely associated with avoiding embarrassment. We often feel shame or embarrassment when we know that we have done something wrong and we now need to own up to it and take responsibility and accept consequences. Sometimes it easier to lie and so throw somebody else under the bus for our wrong doings. Using the gossiping example again, rather than owning up to your close friend about gossiping about them and then apologizing, you may feel inclined to suggest something like “But such and such was gossiping more about you. I just felt pressured to join in. They said meaner things about you”.

To protect other people’s feelings.

These are the ‘little’ white lies we commonly tell others in order to protect their feelings. These are the “yes honey you look great in that dress” or “wow this food tastes really good” when it doesn’t. Whilst honesty is generally the best policy, is there any real value in upsetting or embarrassing someone just because their food is not the tastiest thing you have ever had or they don’t really look that great in the dress? Sometimes white lies are a consequence of choosing one’s battles and abiding by social convention. Not everyone responds well to criticism and so some people may feel that telling a ‘little’ white lie is preferable to upsetting someone or having an hour’s long argument.

To maintain power and control over others.

Sometimes people tell lies in order to control a situation and so exert influence over others. Serial killers are notorious for this one. Even when they have been caught for their murders and even when their victims have been identified, many serial killers refuse to give their victims families closure by revealing where they have disposed the bodies. Serial killers often withhold this vital information so that they can use their ‘valued’ knowledge as a bargaining tool later down the line. A serial killer may only ‘promise’ to reveal where they disposed a body in exchange for not receiving the death penalty or in exchange for a delay in their execution.

This can be as simple as exaggerating your income to appear wealthier than you really are or by adding a skill or qualification to your resume to make you appear more impressive to a potential employer. This form of lying is just as common as telling white lies. It is hard for us humans to not want to impress others. Maybe we spent a lot of money on a pair of shoes but to ‘prove’ to others that we are not reckless spenders, we may lie about how we are thrifty bargain hunters who managed to get the shoes for half price. Or maybe we tell a lie about how we struggled with something when in fact the task was easy and manageable or perhaps, we received sufficient support which helped us.

To get us out of socially awkward situations.

One thing that I really like about some people who are on the autism spectrum is that when they are done talking with you, they have no regard for social convention and so they have no problems saying “I’m finished talking to you so you can go now”. The vast majority of us feel awkward being this upfront even if we are stuck talking to someone that we really don’t want to talk to. To extract ourselves from these painful conversations, we feel that we have to have an excuse and so we may say something like “I have to go now I’m running late for an appointment” knowing full well that no appointment exists. This form of lying is a blend of protecting ourselves and protecting others.

One lie can lead to two lies and two lies can lead to three lies and so on and before you know it, you are in a big mess and the only way out seems to be to tell more lies. This is quite common especially when it comes to telling lies to impress others. That small lie on your resume quickly snowballs until you feel pressured to tell more lies to cover up that first seemingly inconsequential lie. Maybe rather than admitting to others that you are single, you tell a lie that you are in a relationship. When asked to prove your relationship, rather than admitting to your first lie, you begin sending yourself flowers and gifts from your romantic, albeit imaginary, partner.